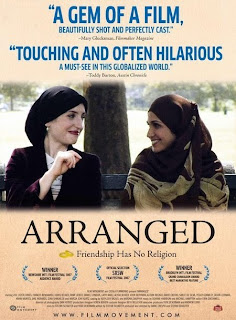 Just watched an amazing film - Arranged. What a delight! How did Arranged not garner tons of indie press and awards? The acting alone was stellar. Arranged is about two first-year teachers in the classroom in Brooklyn, NY. One is Orthodox Jewish and the other is Muslim.

When a kid in their classroom question whether a Jew and a Muslim can be friends, the two women are thrust into a new friendship. A friendship with more in common than not. The bond builds as they are both in the process of arranged marriages right in Brooklyn.

I love this film and so will you - arrange to see it.
Posted by FLICKERIA at 6:54 PM No comments: 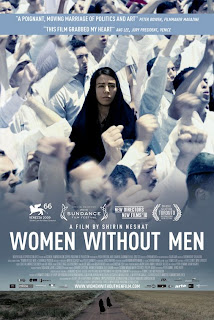 For me, summer is always the worst time to enjoy the movie going experience. With tentpoles and blockbusters, it's like finding depth in Jerry Bruckheimer creation, direction in a Michael Mann vehicle or vision in a Ron Howard piece.

Imagine my delighted to find Women Without Men. Women WIthout Men is an Iranian film directed by Iranian woman (Shirin Neshat) following the lives of several women in 1950s Iran during the 1953 American CIA coup of the democratically elected government of Iran, based on the novel of the same name from Shahrnush Parsipur.

The women without men are four (4) women whose story interconnect through their treatment by Iran men, family, society and their journeys and retreat to an orchard, accessed by a broad and empty road, with a magical garden without men.

One women is Zarin, a young prostitute. Zarin runs away from a brothel and is later seen furiously rubbing her body raw in a public bath. She speaks not a single word in the whole movie, and that is the most effective condemnation of the society in which she lives and thus creates a powerful presence.

It is a very beautiful movie and shot wondrously. There are a few scenes where I was in awe of the cinematography. The acting is superb. The casting is right. The storytelling unfolds gradually and without condemnation.

Although I wonder what life and the world would be like with: MEN WITHOUT OIL AND WOMEN and perhaps ego.
Posted by FLICKERIA at 6:01 PM No comments: