Steve McQueen has come aboard to direct Twelve Years a Slave, which will star Chiwetel Ejiofor in a true story about a New York man who was kidnapped in the mid-1800s and forced to become a slave on a Louisiana cotton plantation.

Twelve Years a Slave is McQueen’s adaptation of Solomon Northup’s 1853 autobiography about a married, educated, free Black man who eventually was captured and enslaved while on a trip from New York City to Washington, D.C. Historians over the years have reportedly used Northup’s book as a guidebook to slave life in the early 1800s. The book goes in detail of the court case which led to Northup’s reclaimed freedom.

In the meantime, McQueen is preparing to unveil his latest fare Shame at the Venice Film Festival. The drama reunites him with Michael Fassbender in a story about a deviant sex addict who reconsiders his dark ways after his younger sister, played by Carey Mulligan, moves in with him. McQueen made waves with his riveting debut film Hunger, about the Irish hunger strike that starred Michael Fassbender and earned the emerging director the 2008 Cannes' Camera d'Or. Focus has its own feature rights package that include Fela’s music, while Brad Pitt's Plan B is producing Twelve Years a Slave.

Both, McQueen and Ejiofor are British. I am often baffled with Hollywood's decision-making to neglect, overlook and by-pass American talent, in this case, specifically Black American talent for films and directorships for a rare Hollywood funded film about Black American history with a non-stereotypical plot.

It is always nice to learn of a sleeper hit. At the 2010 Sundance Film Festival a funny little indie film from New Zealand with lots of fresh faces and hilarious moments called Boy generated a ton of laughs and lots a of word of mouth; however, director Taika Waititi left Sundance without a distribution a U.S. distribution deal.

Waititi took Boy back to New Zealand where it has become a hit on its home turf. Now, as usual, Hollywoodteurs are back -- as they can now see the potential greenery. Boy and Waititi has secured an U.S. distribution deal with Mark Urman's Paladin.

Set in New Zealand in 1984, the film focuses on an 11-year-old "boy" (James Rolleston) who grows up in the remote Maori community of Waihau Bay. "Boy" is obsessed with Michael Jackson and imagining his long absent father (Waititi) is a world traveler. However, when his dad returns, he is an eccentric loser who has served a stretch for robbery. Together, they try to come to grips with one another and develop a lovable neo-non-traditional father-son relationship.

Definitely waiting for showtimes for this one.
Posted by FLICKERIA at 8:25 AM No comments: 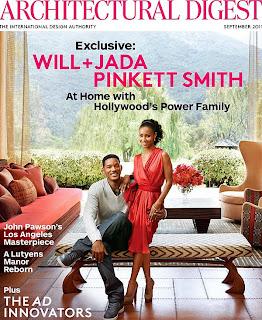 Everyone knows I enjoy all elements of filmmaking. One element is locations. While most think of film locations as simply a room, a cafe, train station or a house, for me it is environment. It is space. It is access to light -- whether natural or designed. It is the unique architectural details of the location set which brings depth, texture and hopefully additional layers to the art direction, story, and at best becomes another character to the unfolding story.

When I was in film school in Southern California, I met an attractive young architect fresh out of Architecture school. On weekends he would zip to down Pacific Coast Highway from San Francisco through Malibu to Long Beach (the least expensive beachfront property in Southern California at the time). He would guide me on private tours of undiscovered Los Angeles area neighborhoods and introduced me to buildings I never saw, although I drove pass these structures on my way to work, to class and to location sets practically every day. Clearly these places were standing; however, I never knew they existed or provided any architectural importance besides: house or office. His expertise helped me to see more. 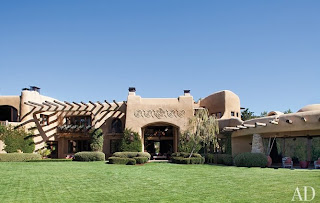 Yesterday I tore open the plastic wrapper of my big fall September 2011 issue of Architectural Digest with Will Smith and Jada Pinkett Smith on the cover. And yes, I too, lament over our lives and society being completely engulfed with celebrity; however, Will Smith is a true Hollywood star unlike no other. AD brilliantly captures this as the Smith's (Will, Jada, Trey, Jaden and Willow) open their 25,000-square-foot Malibu adobe style home for the first time.

Greenlight is a blog about getting your project the greenlight, and this posting shows us how we can live after the light turns green. See for yourself in the September issue of Architectural Digest.
Posted by FLICKERIA at 11:37 AM No comments: 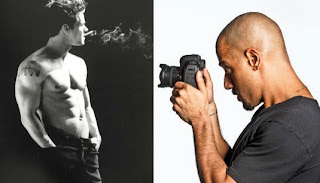 The script was written by Brian Tucker and made the 2008 Black List. The $60 million price tagged production will be financed by Emmett/Furla Films. Principal lensing begins in November with Wahlberg producing through his Closest to the Hole shingle along with Stephen Levinson's Leverage banner. Hughes, Randall Emmett and George Furla are also in the producing seat.

The 2008 Black List is the list of the best unproduced screenplays circulating around Hollywood. I think it is time for the Greenlight Green List operative. The Green List will be a list of screenplays that meet all of the mundane nuances of a Hollywoodteur script, yet is intelligent, clever, story-driven, plot-having and thought provoking that and can be produced on your cellphone, camcorder or Arriflex regardless of budget and names.

Crowe next stars as Jor-El in the upcoming Superman film, while Wahlberg will be seen in Contraband with Kate Beckinsdale in January 2012 and joins Mila Kunis in the comedy Ted, about a man whose teddy bear that comes to life.
Posted by FLICKERIA at 6:28 AM No comments: 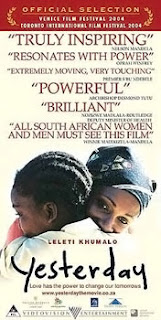 She was named Yesterday (Leleti Khumalo) because her father said yesterday was definitely good and the future is unknown.

Darrell James Roodt directs Yesterday, an Oscar "Best Foreign Language" nominated film unfolding an amazing story of a young contemporary rural African family. Yesterday is the first Zulu language feature film to be released internationally and with this caliber of filmmaking it is certainly not the last. All of the production elements are superbly blended into a near perfect and epic movie. The acting, led by Ms. Khumalo, is verite, easy and will settle you in immediately for this cinematic journey along with her daughter, Beauty (Lihle Mvelase), coal mining husband Kenneth (Kenneth Khambula) and the new school teacher (Harriet Lenabe) she befriends.

The cinematography, brilliantly executed by Michael Brierley, is so vivid and lush and pushes the story of this African village leaving one longing to dismiss all Western amenities in favor of this real beauty. As a filmmaker, one of the true test of a great film is: Can you turn the volume off and still be entertained? Yesterday not only passes this test overwhelmingly, I also understood the conversations without reading the subtitles.

Yesterday is the type of movie more people need to see. It successfully captures life, history, culture and time in 90 minutes. We're all going to live a lot longer than ninety minutes, thus Yesterday is a wise investment into you future.
Posted by FLICKERIA at 9:44 AM No comments: 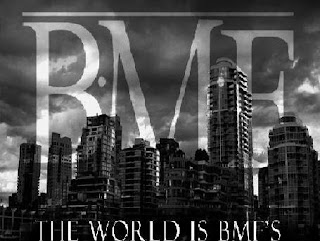 Program Pictures has acquired the motion picture rights to the story of the Black Mafia Family (BMF), the Detroit, Michigan based drug trafficking empire created by brothers Demetrius "Big Meech" and Terry Flenory.

The Black Mafia Family organization began in the late 1980s and by the 2000 BMF had established multi cocaine distribution cells in major US cities. The Flenory brothers established two main hubs, Los Angeles and Atlanta. Through their Los Angeles, run by younger brother Terry, BMF had direct links to Mexican based drug cartels while mastermind and elder brother managed the Atlanta hub.

In 2000, BMF attempted to legitimize itself by entering into the music business, starting BMF Entertainment and helped promote a number of artists, including Young Jeezy, as well as BMF Entertainment's sole artist, Bleu DaVinci.

The screenplay is currently being written. Hutton, who is producing along with Morgan Creek's David Robinson, stated - in true Hollywoodteur form, “We have a passion and enthusiasm in bringing Big Meech’s story to the big screen." Hollywoodteur passion supersedes biopics of gloried drug kingpins over the worthy likes of Reverend Doctor Martin Luther King, Harriet Tubman, Toussaint Louverture -- or another young man who rose from very humble means to tremendous wealth and power: Reginald F. Lewis, all without illegal activity -- save a few white collar exploits, of course.

The Hutton and Robinson are also producing the Tupac biopic, which starts production later this year. One can see where H & R think they are heading - the bank. However, more likely straight to video or the 125th Street DVD bootleg blanket.
Posted by FLICKERIA at 12:43 PM No comments: