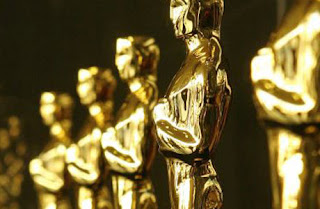 I am kind of speechless with the lackluster field of contenders in every category. Is there a recession in talent and thought not to mention creativity in Hollywood? After this anemic display of noms - surely Hollywood execs will come off the Sundance Film Festival slopes, the Cannes Film Festival yachts, the panoramic penthouse views of Berlin Film Festival and the bland back lots of Hollywood to embrace stories from Native Americans, Asian Americans, Latin/Hispanic Americans, Gay Americans and American Blacks.

February 27, 2011 will not be a night for celebration - just reading the list put me to sleep. WAKE UP HOLLYWOOD!
Posted by FLICKERIA at 11:23 AM No comments: 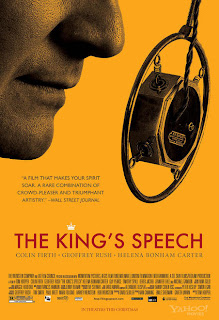 When the Oscar announcements are made on the morning of January 25, 2011, you are certain to hear the The King's Speech loudly, clearly and repeatedly. The King's Speech is the perfect Oscar contender. It has rich costumes, great acting, British history, the monarchy, scandal, moody cinematography, royal locations and just a pinch of humor.

The King's Speech is the true story of England's King George VI (Colin Firth) who stamers - in American English - he studders. While this maybe be fit for the King's brother; however, when it becomes apparent that he will ascend to the throne he must overcome this imperfection and restore nobility and hope to the monarchy and the people of England during wartime as older brother King Edward VIII (Guy Pearce) abdicates the throne in favor of love with a twice divorced American who the church will never allow to be his queen.

While there is plenty underlying dramas going on, director (Tom Hooper) does an excellent job of keeping the story on the love between George, his wife (Helena Carter) and their two young daughters juxtaposed his relationship with speech therapist Lionel Logue (Geoffrey Rush) and his family rather than embracing the scandal and gossip which ultimately makes him King George VI.

The costumes are superb. In cinema, often we tend to overlook men's costuming in favor of gowns and dresses worn by the women in a production; however in The King's Speech, it is the menswear which take center stage from swanky overcoats to tweed suiting the style is spectacular. Look for all of these trends in the Fall 2011 mens collections. You'll clearly know who heard The King's Speech. The cinematography is beautifully damp. One feels as if you are roaming about London.
The one performance that people are not talking about but should be talking about is Guy Pearce who portraits King Edward VIII. Pearce is always amazing and generally overlooked in favor of a more suitable potential celebrity to market and hollywoodize. Here, Pearce is brilliant in a supporting role. If he were on screen for another second he would have completely walked off with the entire production. Yes, he's that good. Nevertheless, it is Colin Firth who will understandably walk away with the Best Actor Oscar statue at this year's ceremony - if only because the Academy recognizes talent and it's own future demise in awarding Sandra Bullock and Jeff Bridges (beating Colin Firth for A Single Man) last year for what will ultimately be known as the year the academy awarded Most Popular and Most Liked rather than Best Actor and Best Actress of the year.

The King's Speech is great movie making. It all comes together nicely. Imagine, a royal historical drama being the feel good movie of the year. All hail the king!
Posted by FLICKERIA at 4:21 PM No comments:

NEW ON DVD: Boy A

Awhile ago I read about the film Boy A starring the new/next Spiderman, Andrew Garfield. Garfield is a brilliant young talent. He is Sean Penn, Leonardo DiCaprio, Edward Norton and Joseph Gordon-Levitt all rolled up into a sinewy unaffected boy-next-door type. After watching Boy A, I only hope he continues on with his craft and shaloms through Hollywood 3-D pics and summer tentpoles to secure great material to truly showcase his budding talent.

Having to restart a life sidetracked at pre-adolescence, now 24 years old, Boy A, Jack (Andrew Garfield), is starting life. Recently released from prison with a new name, new location and new job, Jack embarks upon life as Jack. Aided by Terry (Peter Mullan), his parole contact who becomes like a father to him, Jack hesitantly reclaims life, forms friendships and learns, he too is beautiful, as he enters into a relationship with a passionate young woman.

When tragedy strikes close to work, Jack's good deed is rewarded yet unleashes all of the secrets of the heinous crime he committed as a boy. Although Jack has served his time for this, as we learn more about the crime which has ruined so many lives, the suspense is heightened, the intrigue unfolds and outcome is heartbreak.

Jack learns that it is not so easy to escape your past or to pay for your crime.
Posted by FLICKERIA at 2:57 PM No comments: