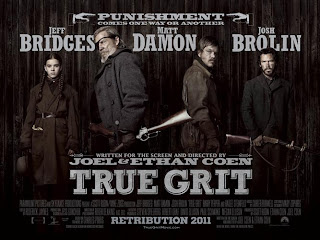 The Coen Brothers definitely have a vision in cinema. The Coen Brothers consistently take classic elements in movie genres and storytelling and flush and explode all of these elements of the classicism out into expertly crafted filmmaking. This time around the result is a western, True Grit.

True Grit feels more like a dark drama but wants to be a story driven Western. Following the murder of her father, a 14-year-old farm girl Mattie Ross (Hailee Steinfeld) sets out to capture the killer Tom Chaney (Josh Brolin). Very clever and effectively resourceful, Mattie hires the toughest U.S. marshal her money can buy, a man with "true grit" by the name of Rooster Cogburn (Jeff Bridges). Against his wishes, Mattie insists on joining him in his trek into the Indian Nation in search of Chaney joined by Texas Ranger LaBoeuf (Matt Damon), who also wants Chaney for his own purposes. Once again Brolin sneaks in a great performance.

In another year when the Academy which gives out the Oscar awards and Hollywood has failed to integrate its imagines, stories, films, technicians, writers, directors, actors, editors, producers or otherwise with Blacks, it is a certain irony that Mattie is brought to recover her dead father’s body by a Black man. Mattie also purchases her horse with the assistance of a young Black boy. Finally she goes on to name the horse Little Black. Those darn Coen Brothers.

The western is a cinema genre of which I am not a big fan. I find it too steep in the Americana man and how the West was won without much said for all that was lost in the struggle. Nevertheless, True Grit has solid acting, the sets and locations are great and the story is engaging. Bang. Bang. Or ka-chang! Ka-chang at the box office.
Posted by FLICKERIA at 3:39 PM No comments: 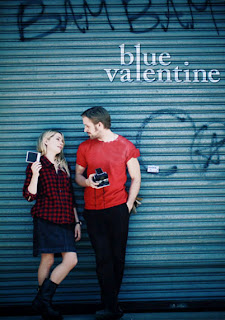 Blue Valentine is the current darling of the independent filmmaking sect. It is the graphic and docu-styled portrayal of a young couple's entre into a serious and committed relationship. Cindy (Michelle Williams) and Dean (Ryan Gosling) are a couple who meet while Dean, a mover by occupation, is relocating an elderly war veteran into his new retirement home, while across the way Cindy, a nursing student, is visiting her grandmother who has retired at the same location.

The story unfolds quite cleverly going back and forth in time presenting bits and pieces of personal data about the couple's formative years granting the audience understanding of these characters current choices and behavior. Dean is a loving, confident, attractive, and artsy young man without a solid capitalistic foundation or future, which obviously makes him idealic and appealing. On the other hand, Cindy is the product of a dysfunctional nuclear family poised to enter the careered world of medicine and the emotionless world of white picket fences and "I think I can be" happily ever after.

When the couple, now married with a child, decides to spend a weekend away in the futuristic room of a nearby hotel, things slowly come undone. Alone together in the confines of the hotel room, Dean and Cindy cannot recapture the liberty which allowed them to unite in the beginning. You will care for the characters because we see these people not only in others but quite often when we look into our mirrors. Nevertheless, you simple want them to get it together, and not necessarily together as a family unit. It is more advice like, wake up and smell the coffee - it's done.

Blue Valentine is what is so good, and equally so bad, with the current state of independent filmmaking. On one hand, we have a great story - contemporary and affected. Great acting - Michellle Williams received an Oscar nomination for her performance, even though it is Ryan who truly shines as a loving committed young father, husband, and friend who attempts to make life pleasurable for all, if you simply work with him.">However, Blue Valentine has a the style and look, and it becomes clear instantly, that this is not indie at all. It is a farce, people with the capability to make a multi-million dollar Hollywood-style movie with young hipsters on display doing cool grown-up things. For those who are unfamiliar with the hipsters in the Williamsburg section of Brooklyn it is like the hippies of the 60s and 70s except they brought ALL of their wealth, privilege, personal ambitions and artsy manifestos with them to capitalize on, while never giving a thought about race relations, social class, or world events. Where most of the hippies eventually got jobs and gentrified America, this new hipster generation has only cared about itself from the very start.

Another giveaway that this is no true indie film is the wardrobe. Both characters don clothing that is supposed to be thrifty - however it is more like Marc by Marc Jacobs the more affordable collection rather than authentic Goodwill or Salvation Army.

All and all, Blue Valentine is not so blue, rather it is Williamsburg styled hipster love story.
Posted by FLICKERIA at 4:46 PM No comments: 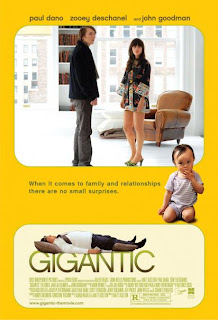 The story of a high-end mattress salesman in Manhattan from an affluent and lovingly goals oriented family, Gigantic is sure to keep you interested. There are so many great performances including a wonderful John Goodman as the father of the love interest, Happy, played by Zooey Deschanel. However, the real stand-out here is Paul Dano.

Apparently Dano absorbed a little Daniel Day-Lewis from their brilliant film There Will Be Blood. Playing Brian Weathersby, Dano is the patient and considerate youngest brother, who since age 8 has wanted to adopted an Asian baby. Dano is so like-able, you want good people around this sensitive young man. Scene after scene Dano fills not only the frame with a nice presence but enters the lives of normal everyday people who need his calming effects.

Gigantic is not a perfect film; however, it did win "Best Feature Film" at the Dallas International Film Festival for director Matt Aselton. In a great film decision making debate, there are two (2) things/scenes/scenarios that should have been left on the editing room floor 1 - Happy's visual conversation with her {absent} mother and 2 - Zach Galifianakis's homeless man shenanigans. Plot points that serve as restroom breaks.

In the end, Gigantic is a fresh, modern take on the boy meets girl genre. It is a story of one man's place in the lives of his friends, family, co-workers, work and personal goals that are unpredictable and often materialize when you least expect it.

How did I miss this one?
Posted by FLICKERIA at 9:27 AM No comments: